I didn’t know this before but a “turducken” is a quail inside of a chicken inside of a duck inside of a turkey, wrapped in bacon with homebrew soaked apples, and baked. And a “pigturducken” is that whole thing shoved inside a pig, and deep-fried in a gigantic propane-powered fryer. Sounds filling & low-carb.
Pigturducken 1 small.jpg
My son, Heath, heard about a pigturducken, and thought it would be a good idea for a party while my wife, Gwynne & I, were gone from the house for awhile and he was tending it. He bought a gigantic fryer online, and ordered a quail, chicken, duck, turkey & pig from a butcher he knows. On the delivery day, the fowl were slaughtered and dressed but, surprise, the pig was alive.
“What about the pig?” he asked the delivery guy.
“What about it?”
“Uh, it’s alive.”
“That’s how whole pigs come. You want it butchered, you gotta say so.”
“I don’t want it butchered, I just want it dead.”
“What’s wrong, your arms broke? Listen, I gotta make another delivery.”
And the delivery guy drove away leaving Heath holding a rope with a live pig on the other end.
Heath didn’t know what to do so he staked the pig out on my lawn. When he came back outside a few hours later, he exclaimed, “What the hell!”
Heath didn’t know pigs root around in the ground. My grass was destroyed in a circle the radius of the rope.
Heath called his friend, Johnno, asking what to do.
“What the hell!” Johnno said, “I don’t know. Watch YouTube.”
Not surprisingly, there’s a number of pig killing videos on YouTube. Shoot the pig in the head to kill it, one said, them string it up from a 16 foot tripod, cut its throat and let it bleed out.
Heath bought the lumber at Home Depot and put the structure up on the vacant lot next door. The neighbors wondered what it was but didn’t get concerned until he hung a live pig upside down, and shot the pig in the top of the skull with his .22 target pistol. The pig didn’t die, but it was pissed.
He called Johnno again.
“Dude, you need a bigger gun,” Johnno told him.
“I don’t have a bigger gun.”
“Find one,” Johnno said and hung up.
Heath thought for a moment then called his martial arts student who was a gun nut, and also the mayor. Heath told him the story.
“I’m there,” the mayor said, and he rushed over with his AK-47.
BOOM! Dead pig. The neighbors would have complained to the mayor about high-powered, semi-automatic rifles being fired in the neighborhood but, ya know, the mayor...
Heath field-stripped the pig on my custom brick patio.
Pigturducken 3 small.jpg
Apparently, the pigturducken party was a big success except nobody brought anything else to eat but potato chips & beer, so it was all the meat you could stomach.
Heath did replant the lawn before I got home but there’s still a big blood stain on the patio.
Turducken 1 small.jpg
You do not have the required permissions to view the files attached to this post.
Mr. Wysdom
Libertyist
Scimonoce
Nonpartisan
Prof. Education
Top

Heath sounds like a badass motherfucker. You have raised some pretty adventurous children. Martin, what parenting strategy did you have that led to your children having the balls to move to Peru on a whim, or shooting a pig in the head for a suburban party? I always enjoy reading about your children's hi-jinks.
Shikata ga nai
Top

heydaralon wrote:Heath sounds like a badass motherfucker. You have raised some pretty adventurous children. Martin, what parenting strategy did you have that led to your children having the balls to move to Peru on a whim, or shooting a pig in the head for a suburban party? I always enjoy reading about your children's hi-jinks.

Cows are bigger than pigs.

Cowpiturducken 2020.
SJWs are a natural consequence of corporatism.

Move over. How about this thing made up of 24 quail, 12 chickens, 8 ducks, 6 turkeys, 2 lambs, a pig and a blanket-size side of wagyu beef butterflied open to wrap all the other ingredients. Hastur wrote:Move over. How about this thing made up of 24 quail, 12 chickens, 8 ducks, 6 turkeys, 2 lambs, a pig and a blanket-size side of wagyu beef butterflied open to wrap all the other ingredients.

Why don’t we do this with other meals? Think I’ll put a chicken breast and some lamb on my bacon cheeseburger, for lunch.
SJWs are a natural consequence of corporatism.

In some places around Sweden you can get a Calzskrove pizza. It's a Calzone with a burger meal inside. Or make a taco out of a pepperoni pizza. 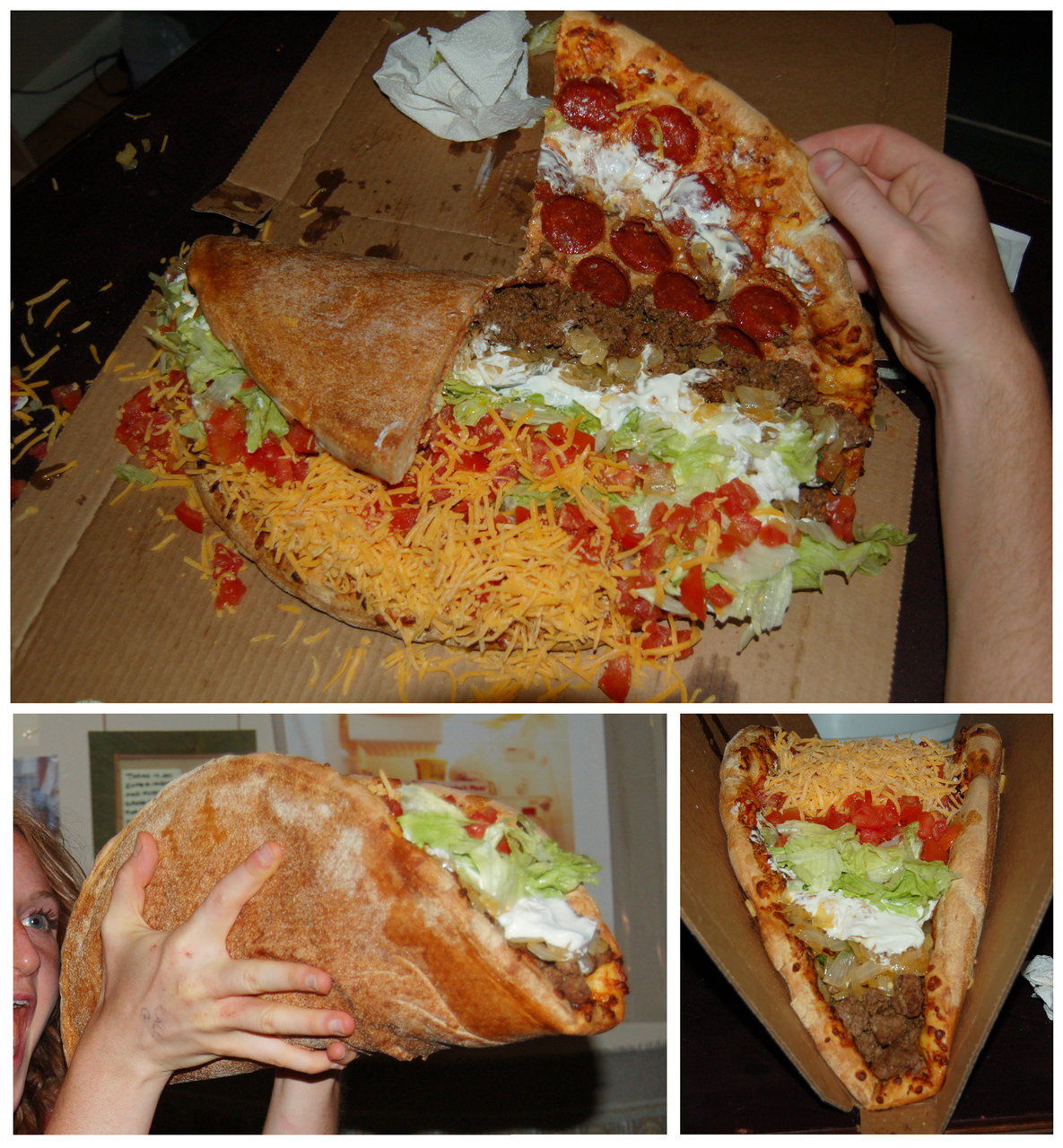 One day I will build a ship of meat.